This week the WHO Regional Office for Europe visited the KNCV head office for an extensive working meeting, followed yesterday with a visit to GGD Rotterdam-Rijnmond and the Department of Pulmonary Diseases and the department of Medical Microbiology and Infectious diseases’ of Erasmus MC. Today WHO EURO went to Beatrixoord in Haren. 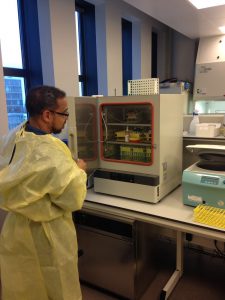 The information gathered over the last three days will lead to a film which will show where we stand in the fight against tuberculosis (TB) in Europe. The Netherlands is highlighted as an example of a country where TB is well controlled. An Eastern European country will be profiled as a high burden country. The film will be presented on 24 March, World Tuberculosis Day. The aim is to show success stories, of which The Netherlands is clearly one, to give hope and to encourage Ministers of Health and other politicians and policymakers to not just keep up the good work but actually accelerate in the fight against TB.

Because 2018 will be an important and potentially pivotal year for TB control and care. It is 10 years since the Berlin Declaration and a few months since the Ministerial meeting on TB was held in Moscow, with the UN High Level Meeting on TB planned for September 2018 and the UNION’s 49th World Lung Health Conference is being held in The Hague in October 2018. This was also again confirmed during the meeting on Wednesday between KNCV and the TB unit of Joint HIV and Hepatitis Programme (JTH) of WHO EURO.

The working partnership between KNCV and WHO EURO is an important one. Although KNCV’s main area of work under the Challenge TB project in particular, is outside of Europe, the work in the European Region remains very essential to KNCV. During the working meeting ideas were exchanged on key programme directions from each agency in 2018/2019, achievements and challenges in implementing collaborative activities in 2017 were discussed and new/additional areas of cooperation were considered.

We very much thank Masoud Dara, Martin van den Boom and Sayohat Hasanova from WHO EURO for their visit.