Tuberculosis infection (TBI) occurs when a person is infected with Mycobacterium tuberculosis but does not have active tuberculosis (TB). Unlike active TB disease, TBI is not contagious. Approximately 10% of people with TBI will, however, go on to develop active TB disease in their lifetime. Individuals with TBI are, therefore, a reservoir of potential future active TB disease within the population: this may lead to new TB outbreaks. People with a suppressed immune system due to underlying conditions such as HIV or diabetes, or because of advancing age have the greatest risk of developing active TB disease.

To control TB, it is, therefore, important to identify persons who may have TBI and to treat them with TB preventive treatment (TPT) to stop TBI developing into, contagious, active TB disease in the future. That is why during the UN General Assembly high-level meeting on tuberculosis in 2018, the Assembly adopted the declaration that by 2022 at least 30 million people should have received TB preventive treatment (TPT), including 4 million children under five years of age, 20 million other household contacts of people affected by TB, and 6 million people living with HIV (PLHIV).

KNCV has been an implementing partner of the Aurum Institute led, Unitaid funded, project called Increasing Market and Public health outcomes through scaling up Affordable Access models of short Course preventive therapy for TB (IMPAACT4TB). Other partners in this consortium are the Clinton Health Access Initiative (CHAI), Johns Hopkins University, Treatment Action Group (TAG), and the World Health Organization (WHO).

The goal of IMPAACT4TB has been to scale-up short-course rifapentine-based TPT among high-risk groups: PLHIV and child contacts of persons with active TB disease and, thereby, to reduce TB incidence and deaths. Additionally, the project aims to contribute to revising WHO TPT management guidelines based on evidence generated from this project. The project was initially focused on 3HP, a short-course TPT regimen of isoniazid and rifapentine taken weekly for three months to treat of TBI. The IMPAACT4TB project started with a clinical study that ascertained the safety of co-administering and dosing of 3HP and an anti-retroviral treatment (ART) called Dolutegravir (DTG).

Following the success of the study, Unitaid and the IMPAACT4TB project led negotiations that resulted in global rifapentine price reductions in 2019 and 2021. In parallel, the project facilitated the introduction of 3HP as an additional TPT option for PLHIV and household contacts of TB patients in 12 project countries (Brazil, Ethiopia, Cambodia, Indonesia, South Africa, India, Zimbabwe, Kenya, Malawi, Mozambique, Ghana, and Tanzania). KNCV, in close collaboration with national TB and HIV programs and local stakeholders, has been supporting the introduction of 3HP in Malawi, Ethiopia, Tanzania and Indonesia.

Unitaid and the IMPAACT4TB consortium also collaborated with PEPFAR, USAID, CDC, the Global Fund, and other stakeholders to accelerate wider scale-up of the 3HP regimen. These efforts contributed to wider adoption of short course-TPT and procurement of rifapentine-based TPT by at least 47 additional countries by the end of June 2022. KNCV is also implementing research to ascertain further evidence to support the expansion of short-course TPT coverage. This includes research on improved TPT service delivery models in child contacts (Ethiopia) and PLHIV (Malawi) and comparing the effectiveness and safety of the 1HP regimen vs. the 3HP regimen in HIV-negative household contacts in Indonesia. 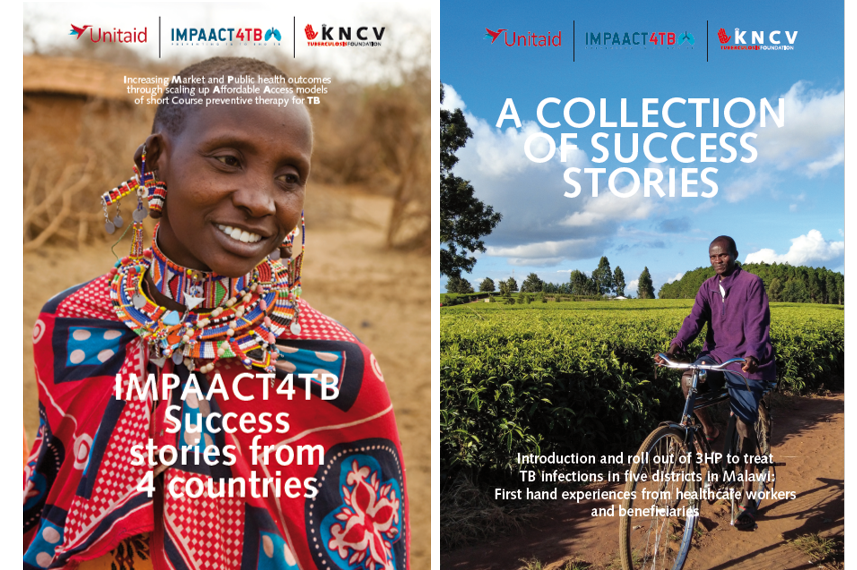 Two booklets on the success of the IMPAACT4TB-project were recently published by KNCV: IMPAACT4TB Stories from 4 Countries and I4TB Success Stories from Malawi.