KNCV Tuberculosis Foundation (KNCV) is pleased to share the highlights of the recent 49th Union World Conference on Lung Health 2018, that took place from 24 to 27 October 2018 at the World Forum in The Hague.

In the year that we also celebrate 115 years of experience in fighting TB worldwide, KNCV was proud to be the conference local host, together with the city of The Hague.

Her Imperial Highness Princess Akishino of Japan and Her Royal Highness Princess Margriet of the Netherlands both attended the inaugural session at the Union World Conference. Princess Margriet delivered an inspirational opening speech in which she explained her own family’s connection with TB and praised the work that KNCV has done in eliminating TB in the Netherlands and abroad. Following the opening ceremony, the princesses visited the Holland Pavilion where they met with TB survivors. 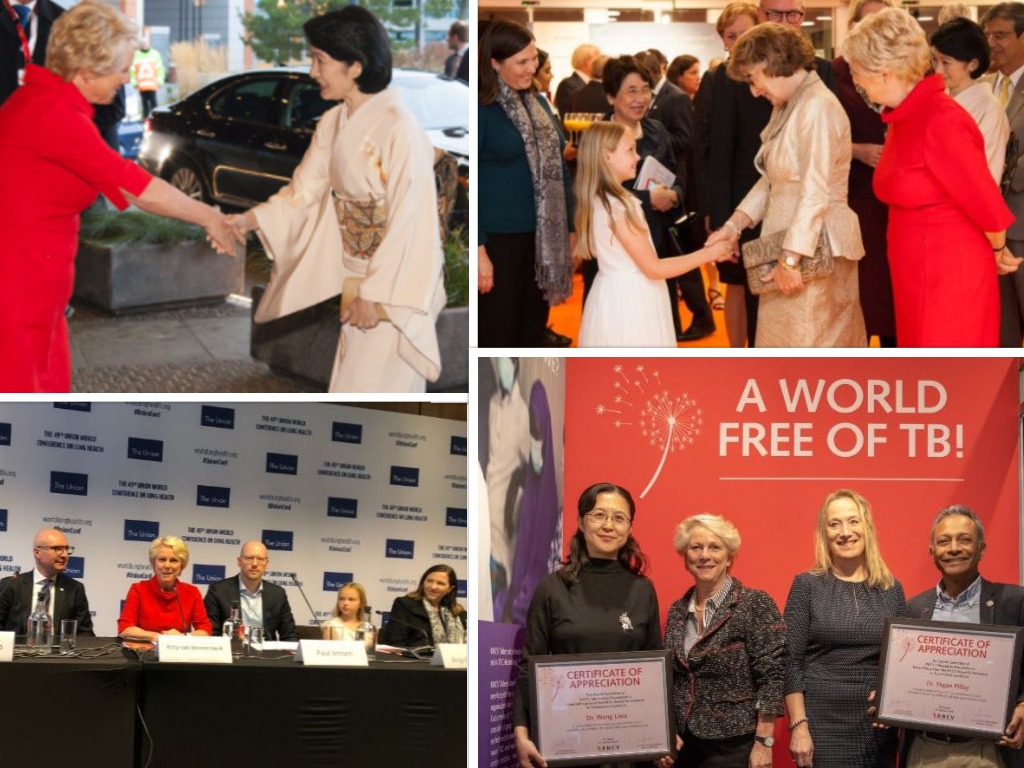 Dr Eric Goosby, UN Special Envoy on Tuberculosis, spoke of the increasing political momentum following the recent UN High Level Meeting. “Yes, we have hurdles before us. No one at the UNHLM said it was going to be easy. But we must remember that TB is preventable, treatable and curable. Now let’s make it doable.” Dr Kitty van Weezenbeek, Executive Director of KNCV Tuberculosis Foundation (KNCV) relayed her own personal story, addressing the stigma that surrounds TB and emphasized the urgency to step up the momentum in the fight against TB. “I’m probably the only executive director who wants to close its doors.”

Childhood TB was a recurring theme during the Union World Conference. Nine-year-old South African Angelina told her touching story. She is one of the survivors featured in the newly released book Child TB & Stigma. Senior technical consultant at KNCV, Gunta Dravniece shared success stories related to placing children on new drugs and regimens in Kyrgyzstan. But by far the most impressive Breaking News came with the announcement of a simple stool-based test, developed by researchers at KNCV, that can easily diagnose TB among children. This test could become a global life-saver by enabling millions more children at risk of TB and MDR-TB to be tested. This simple Xpert stool test proved positive (confirmed TB) in all those children who also had positive respiratory samples – there were no false negative stool samples. The work was done in collaboration with Ethiopian and Indonesian research institutes, and their respective national TB control programs. 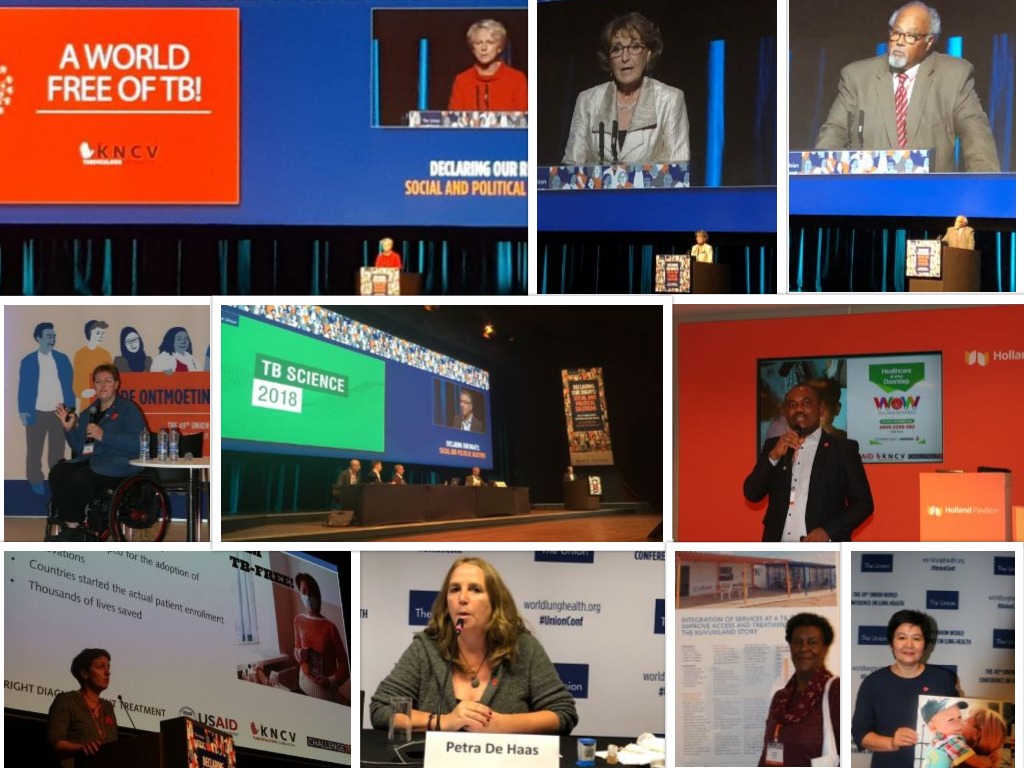 TBScience2018, attracting some 400 delegates, was the first-ever science focused gathering running in parallel to the larger annual Union conference. This came about as a direct result of the first meeting of the WHO TB R&D taskforce in 2017, where the need for a dedicated TB basic and translational science conference was concluded. The Union, in partnership with WHO, KNCV, TSRU and AIGHD organised this one and half day TBScience2018 event which was entirely devoted to basic and translational TB research. Scientists from various disciplines (microbiology, immunology, molecular biology, pharmacology, clinical science, epidemiology and mathematical modelling) assembled to present and discuss recent findings relevant to the understanding of TB transmission, infection and disease, and to the development of new vaccines and drugs, in a cross-disciplinary manner. The event format comprised a combination of invited and abstract- sessions and presentations with a pure science focus, whilst the implementation side of the equation remained the focus of the main conference.

Nearly 130 nurses from 36 countries met at ‘TB Nursing Care around the World’, a side-event held during the Union World Conference. In this session nurses from five countries (India, Marshall Islands, Zimbabwe, Canada and the Netherlands) shared their professional experiences related to the delivery of TB care in a range of settings. Deepti Chavan, a MDR-TB-survivor from India also shared her impressive story with the nurses. During a scheduled networking slot, nurses were able to meet each other and discuss how to initiate a (digital) platform for the continuous sharing of knowledge and experiences. Many thanks to our sponsors, the ‘s Gravenhaagse Stichting tot Steun aan de Bestrijding van Tuberculose and V&VN Dutch Nurses’ Association.

In the Holland Pavilion, located in the central area of the venue, KNCV brought together a diverse group of Dutch stakeholders working on TB prevention, treatment and care, as well as lung health in general. The Pavilion proved to be extremely popular, with many delegates visiting the booths and listening to presentations of high quality. The ‘Dutch afternoon’, which took place on the final Friday proved a resounding success. Former patients and professionals explored the past, present and future of TB in the Netherlands, as well as the deployment of Dutch expertise and experience worldwide. We would like to thank all our partners and exhibitors in the Holland Pavilion for their participation and enthusiasm which contributed to making the Holland Pavilion a great success! 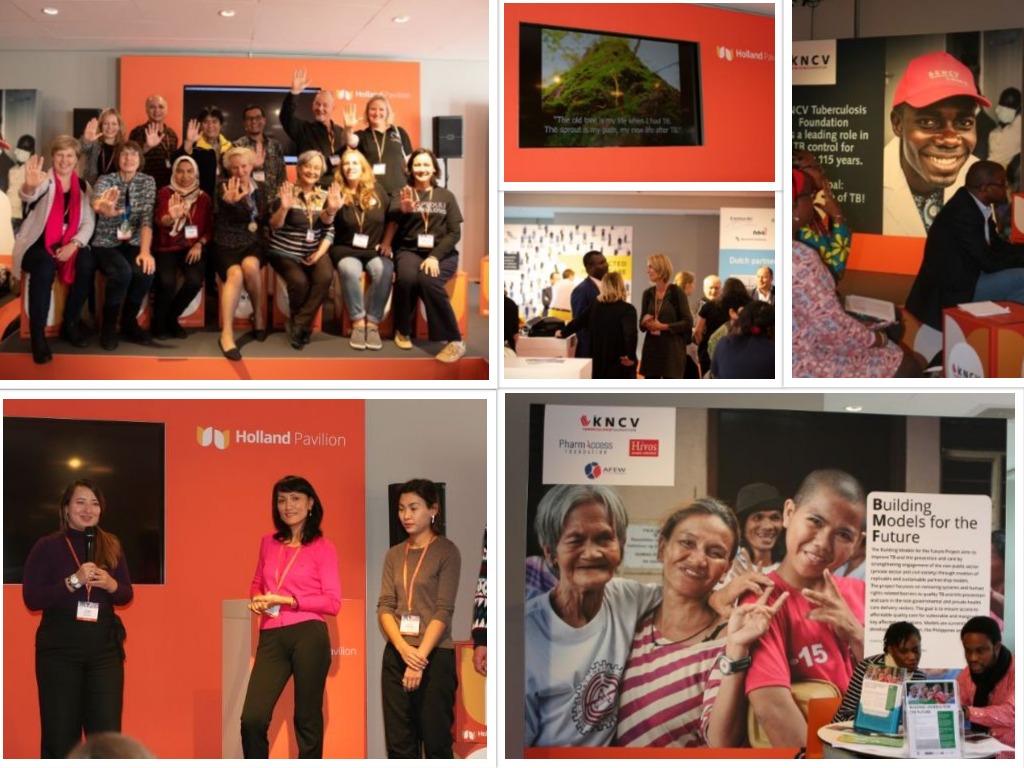 During the closing ceremony of the conference Dr Wang Lixia and Dr Yogan Pillay were awarded with the prestigious KNCV Tuberculosis Foundation Award for Eminence in Tuberculosis Control. KNCV executive director Kitty van Weezenbeek presented the Dr Karel Styblo medallion and a certificate of appreciation to Dr Wang and Dr Pillay. KNCV grants this prestigious award once every five years to honor those who have provided a long-term significant contribution in the fight against tuberculosis.