Khasan (1979): “I am a citizen of Uzbekistan, but I have been living in Russia with my family for several years. In October, a dry cough began. My temperature rose and I started sweating. The symptoms kept on intensifying for several days. I thought it was a common cold and took up self-medication, natural remedies, antibiotics and anti-inflammatory drugs. It seemed to have become easier for several weeks, but the cough did not go away. Then, in December, the symptoms reoccurred with still a cough and also sputum, weakness, weight loss and I also lost my appetite.”

“I went to the doctor nearby where I lived. The doctor examined me, made a chest X-ray and took sputum for analysis. A few days later, I was diagnosed with tuberculosis (TB).” 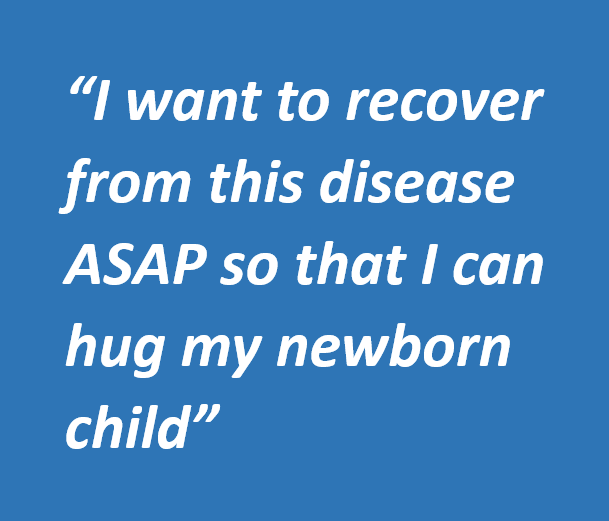 “Treatment in Russia turned out to be expensive. I had to return on the next flight to Uzbekistan and apply at the place of residence to the Regional Center for Phthisiology and Pulmonology, where I was examined more thoroughly. This lead to the diagnosis of pulmonary tuberculosis. I was hospitalized and they offered me the latest treatment for my case of the disease.”

“As the doctors explained to me, the effectiveness of the BPaL treatment, that is offered through the LIFT-TB initiative, is much higher than the usual treatment in a very short time and with a small amount of drugs. This treatment seemed effective to me and I agreed to it, because I want to recover from this disease as soon as possible so that I can hug my newborn child. Everyone in the family was examined for tuberculosis, none of them had the disease.”

“After the start of treatment, my condition improved dramatically; I began to gain weight and noticed that my appetite and mood improved. I was allowed to be treated on an outpatient basis at home. My wife and children flew to Uzbekistan, where we now live!”

“I want to tell everyone that tuberculosis is not a condemnation and it can be treated quite well, especially with modern drugs. “We are very grateful to the doctors that cured my husband,” my wife also told the doctors!”

KNCV Tuberculosis Foundation is one of the implementing partners of the LIFT-TB initiative of TB Alliance, funded by the Republic of Korea. LIFT-TB (Leveraging Innovation for Faster Treatment of Tuberculosis) aims to broaden adoption and scale up of improved tuberculosis (TB) treatment regimens. The initiative will also seek to increase treatment completion rates for drug-resistant forms of TB in some of the countries most affected by this form of TB across the Southeast and Central Asian regions.