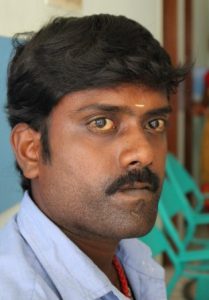 Life can be tough for the seven million citizens of Chennai, India. While the country is the world’s fourth fastest growing economy, many people have not yet benefitted from this economic growth. While most people can avoid starvation and maintain a decent living for their family,  having a traffic accident or developing health issues can prove catastrophic. This is the story of Karthik and Babu, two men in the prime of life who saw their fortune change when they discovered they had active Tuberculosis.

A year ago, 28-year old Karthik got married. As an air-conditioning mechanic he made a decent wage and things were looking up for the young couple. While saving up for their own place, the newlyweds decided to move in with Karthik’s family in one of the lower-income neighborhoods in the bustling city of Chennai.

Karthik’s life seemed very different from Babu, a 40-year former plumber-become-rickshaw driver and father of two. As a person living with HIV, Babu was well aware of the impact a disease can have on a person’s life. While his wife and children had avoided the same fate, his status meant receiving life-long antiretroviral therapy. This treatment is intended to suppress the HIV virus and stop the progression and transmission of HIV disease, which demands strict adherence yet allows the patient to live a relatively normal life. 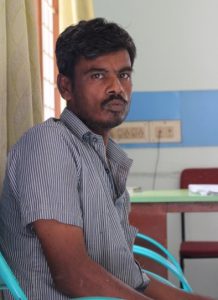 While both men appeared to have very different lives, below the surface they were developing similar symptoms. When Karthik first started coughing heavily and becoming feverish, he visited a hospital where he was started on intravenous injections for a week, but his condition only got worse. Karthik’s mother could look on no longer and decided to take him to their family doctor, a private healthcare provider in the neighborhood.

Meanwhile, Babu noticed how easily he would get out of breath walking around the neighborhood. He had severe coughing bouts and every couple of days he would develop a fever. He would buy cough medicine at the local pharmacy to alleviate his condition. At first he scoffed at people telling him he looked skinny, but soon he was starting to feel wobbly on his legs and suffer from serious chest pain. That’s when he realized something was seriously wrong.

Both men were lucky to have the loving support of their families, who brought them to a healthcare provider in the neighborhood. The female GP in their neighborhood was connected to the local EQUIP project, which allowed both men to receive vouchers for free x-ray and GeneXpert testing. 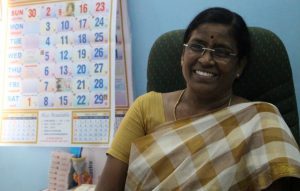 Being diagnosed with TB hit Karthik like a brick; all his hopes and aspirations appeared in peril when he heard he had the same disease that each year kills roughly half a million of his fellow countrymen and women. Yet in this dark moment, a ray of hope would come shining through. He was introduced to Kalpana, a young but extremely capable healthcare worker for the EQUIP program. Every week he would visit the offices of REACH, the local NGO that serves as an interface agent between local private and public healthcare organizations. There, Kalpana was there to help him cope with the treatment and its severe side-effects by providing much needed information, support and counselling.

“Every time she talked to me, she motivated me to continue to be strong” Karthik (28)

For Babu, the news was equally devastating. As difficult as it had been to cope with his HIV treatment, now he had developed TB, the primary cause of death for people living with HIV. As HIV weakens the immune system, it increases the likelihood of latent TB developing into active TB. He too received support and counseling through the EQUIP program.

“After my diagnosis, she told me not to worry. If you take your tabs, It’ll be okay. That made me less afraid, knowing there was a cure” Babu (40)

TB medicine is free in India, and counselling and support was provided free-of-charge by the EQUIP program which meant both men were able to access quality TB diagnosis and treatment through their familiar private family doctor. Even though the costs for patients are limited, the intensity of TB symptoms in combination with side-effects of the drugs, mean people are generally unable to work. This has significant impact on not just the patient, but their family as well. When the sole breadwinner in the family falls ill, there is little to prevent a family from becoming trapped into poverty.

For Karthik and Babu, they were fortunate to be able to rely on their family. The EQUIP health worker supported them with their treatment, reminding them to take their drugs and even delivering the drugs when they were unable to collect them.

Karthik owned a house and was provided healthy meals by his mother who sells vegetables for a living. Babu was not that fortunate, and his combined HIV and TB treatment made it hard to cope without a source of income. Because of the precarious nature of his situation he was provided with nutritional support in the form of food coupons, which his wife used to cook him daily health meals. 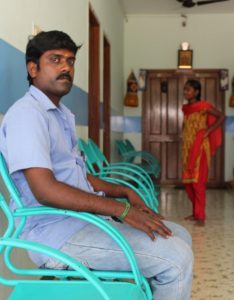 “I never wanted to stop taking the drugs, without them I would die” Karthik (28)

For eight long months Karthik did not work, relying on the loving support of his wife and mother, while grateful for the support provided by Kalpana. When he started to feel better he wanted to get back to work, but his parents asked him to wait and focus on finishing the regimen. At the request of his parents he has now found a job closer to where he lives, and he is now eager to tell others about the importance of quickly diagnosing and treating tuberculosis.

For Babu, life is painfully slowly returning to normal. Each morning he takes his TB drugs, while at night he takes his HIV medicines. He struggles financially, but manages to survive by borrowing money from his brother. “It’s hard to support my family, luckily the medical care is free-of-charge, because the drugs and support are vital”. Babu cannot work fully yet, but occasionally he drives his rickshaw for some of his regulars to make a bit of money to support his family.

As this story shows, it is often not the costs of treatment but the lack of income that can lead TB patients to the vicious cycle into poverty. Providing patients with nutritional aid not only increases their chance of getting cured, it also removes some of the strain on their family’s budget. The EQUIP program is funded by the Eli Lilly Foundation, technically supported by KNCV and executed locally through REACH. It is sustainable programs like these that provide hope and support for patients facing the combination of TB treatment while not being able to provide for their family.

“Whenever I have any questions, about the drugs or side-effects, she is there for me. I can call her and she would ensure I get to see a doctor” Babu (40)