In the office of REACH, a Chennai-based TB organization, sit Vihaan and Anjali, a couple in their early forties who came to share their story. Vihaan is a rickshaw driver by profession and his wife Anjali works as a maid. Their hard work earns them about 90 dollars a month, just enough to sustain themselves and support the education of their twelve year old son. They both come from poor families and are motivated by the desire to give their son a better life than they have had. 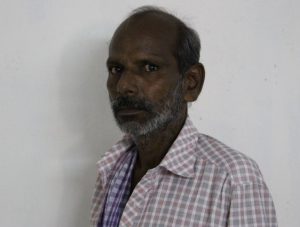 Their lives appeared to be going according to the plan, they both worked while their son attended a private school that would undoubtedly give him better chances in life. But Vihaan started losing his appetite and was coughing regularly. When he started having a fever in the mornings and evenings, Anjali started to worry. A month passed, and his condition only appeared to get worse.

Anjali: “Every time he went to work, I was scared whether or not he would come back”

The worried couple visited their family doctor, who as a participant in the EQUIP project, was able to supply them with vouchers to quickly get Vihaan tested for TB. The couple knew little about tuberculosis, Anjali had heard the name before but that was about it. Little did she know she would soon learn more about TB than she ever would have expected.

For a family that’s scraping by on two modest wages, just getting hospitalized already has significant impact on the family’s finances. The bill amounted to roughly two weeks’ worth of income, and the couple started to worry for their family’s future.

Vihaan: “Our child’s education is the most important thing for us, we worry about this fundamental issue”

As the main breadwinner, Vihaan’s illness had a severe impact on the family’s income. No longer the ‘man of the house’, he felt guilty and sad for not being able to support his loved ones. Tuition, and even basic school supplies for their son became close to unaffordable and they worried about the potential cost of Vihaan’s treatment.

Amidst all this bad news, it was a relief for the couple to hear that the TB drugs would be supplied for free, and REACH was able to provide them with information, counselling and even nutritional aid. They were introduced to Joseph, a friendly and experienced TB health worker who helped them come to terms with the regimen and learn about the disease.

Anjali: “I was very scared that he would die, but the doctor and Joseph gave me hope”

In order for TB drugs to be effective, it is important that they are taken with precise regularity, preferably observed by a witness, to ensure no mistakes are made. This ‘directly observed treatment’ (DOTS) is often done by a healthcare worker, but this meant travelling back and forth on a daily basis, in less than ideal conditions. Instead, Anjali took it upon herself to learn the process, soon becoming a qualified ‘DOTS officer’ for her husband. Every week she receives a weeks’ worth of TB drugs at a local center, makes sure Vihaan takes the medicine every day and cooks healthy meals for her now much thinner husband. Joseph in turn guides the process, gives her advice and recommends healthy ingredients that will help in his recovery.

Anjali: “When he was diagnosed I was very afraid whether or not we could afford the treatment, but the free treatment has felt like a gift from god” 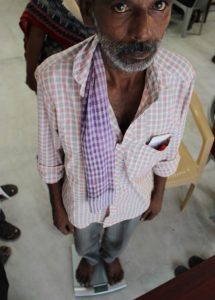 Anjali told the neighbors and her employers about her husband’s disease, which allowed her to get some time off work to take care of her now fragile husband. She feels that her colleagues are very supportive and Joseph assistance helps her to cope with the intense process of curing TB.

Meanwhile, her husband started to slowly recover and his symptoms started to subside enough for him to be able to perform simple tasks such as bathing. However, the side-effects of the toxic drugs were taking their toll, causing him to often feel dizzy and nauseas while his joints would ache.

While there is often friction between the two when discussing financial issues, Vihaan is slowly but surely becoming cured. “Soon I can go to work again, because of my supportive wife” he says as she holds his hand. They both know what is at stake; “He must recover, for everyone’s sake”.