The little Vietnamese baby Dang was only three months old, when he started coughing. He started crying more and more and also got a fever. His parents took him to multiple healthcare centers. Baby Dang had to undergo complicated and painful testing methods, to see what was wrong with him. Eventually the painless Simple-One-Step (SOS) Stool Method diagnosed him with TB.

His parents still burst into tears when they talk about how their baby boy suffered. The family is part of the Tay ethnic minority that lives in the Tri Thuong commune (Lao Cai province, Vietnam). They first brought their son to the Communal Medical Center. After staying there for seven days without signs of improvement, his mother Thao took baby Dang to the Bao Thang District Hospital, where he was diagnosed with chronic bronchitis.

“I took him back home and gave him the prescribed medicines, but he was still not recovering”, tells Thao. She went back to the district hospital, where he was hospitalized for one night. Because of his symptoms – coughing and high fever – Dang was then transferred to the infectious disease department of the Lao Cai General Hospital. Since Dangs father Truong was already diagnosed with TB, doctors suspected the little boy had TB as well.

The testing procedure was horrible, tells Thao. To diagnose TB, a sputum test is still the standard in many countries worldwide. Unlike most adults, young children – and especially babies – are unable to cough this up on command. To collect the sputum, healthcare workers have to use complicated and painful procedures. Baby Dang had a tube inserted into his stomach, so the doctors could get his gastric juice and get the sputum from there. Thao: “It was really painful to witness how they did this to my son. He is so small. The doctors did it three times, however all three TB tests came out negative and they decided to discharge him.”

10 days after discharging, little Dang still showed no signs of improvement. Desperate and scared, Thao again took him to district hospital where she asked the doctors to transfer him to a specialized hospital. The doctors at the Lao Cai General Hospital advised her to take her son to the National Lung Hospital. She and her husband Truong had to borrow 2 million Vietnamese Dong (88 US dollar) from friends and relatives, so that Thao could take the bus (500 km) and pay for the other travel expenses to bring Dang to this hospital. An amount they fear they can never pay back. 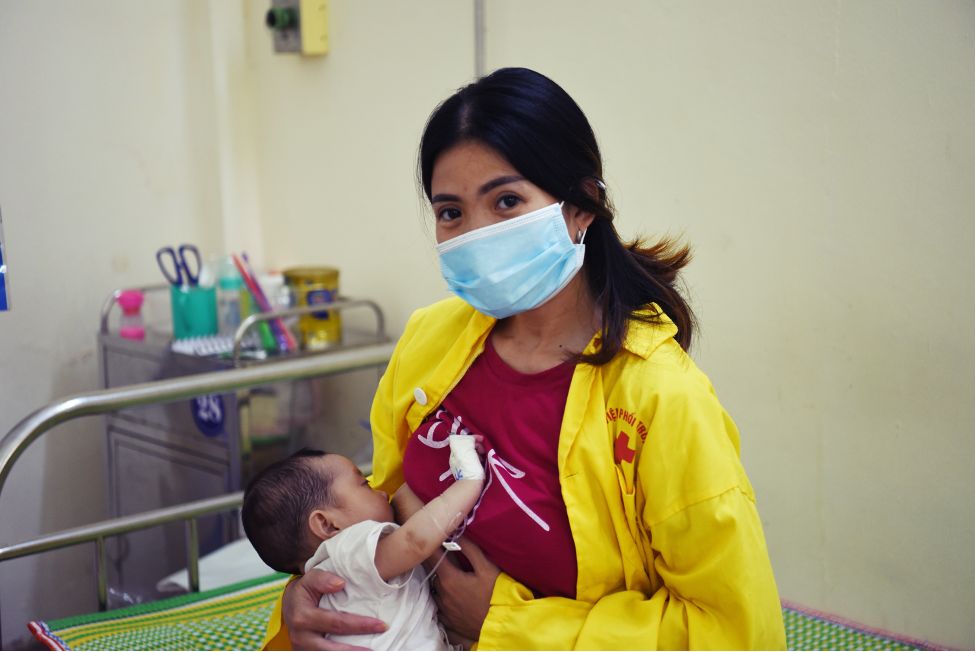 By now it was April 2021, a month after she first took Dang to a doctor. Thao: “At the National Lung Hospital, they did the same complicated and painful sputum test again, and also tested his stool for TB. This was not painful of course. Both tests turned out positive. He was diagnosed with military TB and pneumonia and started on TB treatment.”

When little Dang started to recover, his parents could finally feel a bit of relief. Thao: “After 20 days he was discharged. He continues treatment under supervision of a local healthcare center, and he is doing much better now.”

Thao and her husband Truong hope that other parents and children don’t have to go through this horrible experience. The Simple-One-Step (SOS) Stool Method, that was developed by KNCV Tuberculosis Foundation, truly makes a huge difference. Thao: “I hope children will only be tested with that method from now on and no longer with the painful tubes.”

In Vietnam, already 10 healthcare facilities, including the National Lung Hospital, routinely use the SOS Stool Method. Vietnam is the first country in the world that implemented the method as a routine test. Now that the WHO recommends the use of stool for TB diagnoses in young children many other countries are expected to follow.

Recently the development and routine use of the SOS Stool Method has been published in the international Journal of Clinical Microbiology . The biggest advantage of this method – next that it uses stool that can be easily retrieved – is that no additional materials are needed than what is used for sputum testing. It also uses the same machine – GeneXpert – as is used for sputum testing.

Thao hopes the SOS Stool Method will soon also be implemented in all smaller healthcare facilities in Vietnam and other countries. Like in the Lao Cai General hospital, where Dang was first tested. There, they only knew how to do the sputum test and that turned out negative, possibly because the bacteria load in his lungs was too small at that point. Scientific research shows that using different sample types increases the change of picking up the bacilli. SOS Stool Method experts therefor think there could have been a change that TB was picked up if this method was also used.

That would have saved the family and little Dang a lot of suffering, time and expenses. ‘Luckily’ they did find the TB in time for Dang to recover. Worldwide many families suffer even more. Every year 170.000 children die of TB, because it is not treated in time, or not diagnosed at all.

At KNCV, we wanted to share this story with you, for we want to end human suffering due to TB, save lives and eliminate TB. We are proud that the KNCV Stool Method can contribute to this aim and we hope it will help many children to get a painless, quick and accurate TB diagnosis.