KNCV Tuberculosis Foundation has had an active role in TB control in Kazakhstan for many years, through various projects funded by USAID and the Dutch Ministry of Foreign Affairs (DGIS). The KNCV office in Almaty continues to serve as an important technical hub for several projects in the Central Asia region.

In 2015 KNCV started implementing a new project funded by DGIS. KNCV brings the experience needed to bridge gaps between institutions that are not part of the National TB control Program (NTP), such as local non-governmental organizations (NGOs) and the private sector. KNCV is working in partnership with the Netherlands-based NGO AIDS Foundation East-West (AFEW).

A mapping exercise conducted by KNCV and AFEW in August 2015 shows that the Kazakhstan NTP has achieved significant progress in TB control. In the last 10 years the annual estimated incidence of TB (all new cases occurring in a year) declined by over 50 percent: from 147 TB cases per 100,000 population in 2005 to 66 cases per 100,000 population in 2014.

Despite this progress, Kazakhstan is still included on the WHO Regional Office for Europe’s list of 18 high-burden countries and ranks among the 27 countries in the world with the highest burden of multidrug-resistant TB (MDR-TB). In the NTP’s Annual Report for 2014 it was estimated that 23 percent of all new cases of TB were MDR-TB cases, as were approximately half of all TB retreatment cases were MDR-TB.

The Kazahkstan Government has been significantly raising its national budget for TB control year by year, focusing on the rapid scale-up of treatment for people with MDR-TB in response to insufficient quantity of second-line drugs and the list of MDR-TB patients awaiting treatment. A major barrier to providing universal access to care is the common practice of hospitalization of TB patients. Long hospitalization of TB patients caused nosocomial transmission (i.e. transmission in hospitals and other healthcare facilities) and increased the costs of TB care. Another major barrier to universal access is the financing system in which funds for TB care are based on the number of TB hospital beds. In recent years, efforts have been intensified to provide ambulatory care instead of hospitalization. The proportion of TB patients who were receiving ambulatory TB care grew from 7.5 percent in 2013 to 9.2 percent in 2014. Although there is progress, it remains a challenge for the TB services to make the switch from hospital-based care to primary health care, specifically in terms of continuing to provide quality standards of care and patient support services.

TB/HIV
The HIV/AIDS epidemic in Kazakhstan has been spreading very rapidly since 1987, with most HIV infections occuring through injecting drug use. But since 2011, the sexual (heterosexual) transmission of HIV (50.7 percent) is becoming predominant. The rate of TB/HIV co-infection in Kazakhstan has more than doubled since 2010, from an estimated 1.4 percent (333 cases) of individuals with TB who were co-infected, to the current 3 percent (685 cases) of TB/HIV co-infection.

KNCV and the DGIS-supported project in Almaty 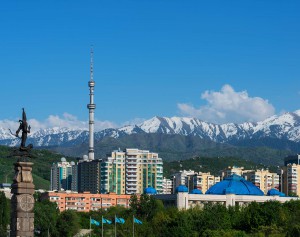 Through the DGIS-funded project in Almaty, KNCV is developing a model for structural collaboration between public health (TB, HIV, primary health care) and the non-public sector. Key partners from public, non-public and private sectors as well as the NTP are all based in Almaty city. The project builds on an approach that was successfully implemented under the USAID-funded TB CARE I, for ambulatory care accompanied by a patient support program. This emphasized working with and strengthening the engagement of the non-public sector, thus supporting NGOs to strengthen their TB/HIV care support services to people with TB/HIV.

In the implementation of the model, the pilot project focuses on Almaty, which is the largest urban area in the country. In Almaty we are seeing the same trends in terms of key TB epidemiology indicators that have also been observed at the national level in Kazakhstan.

In July 2015 a first stakeholders’ meeting was held, which included participants representing NGOs, private providers, the National TB and HIV programs, as well as local Almaty TB and HIV programs. The meeting was the first of its kind in which both the public and private sector discussed engaging as partners in TB/HIV care provision, and marked the kick-off of the project.
The project will support the establishment of a network of NGOs that will have the capacity to provide TB and HIV care to the most vulnerable populations, and build a partnership between public and non-public sectors to improve access to TB and HIV care by the development of a referral mechanism.