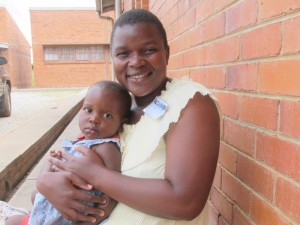 Ruth Chivasa, 31 years, is a VHW in Whawha, Gwuru province. Her mother died of TB as she believed it was caused by witchcraft and did not go for treatment. Before, since 2007, Ruth was a HIV care giver in her community in the time HIV was beating hard on the population without good access to ART. As the wife of a prison officer she volunteered for the care taking of the many bed ridden HIV patients among the 2000 prison staff and families. She tells: “it was in my position to help people in need, it was just a call of God”. She attended many patients but also many passed away as there was no treatment.
In 2010 she followed a 3 weeks course of VHW, followed by a 6 weeks training at the prison clinic, and later a 5 weeks refresher training. After that she worked in maternal and child care as well as HIV/AIDS. She says: “first I panicked, but later I enjoyed it”. “I supported a prisoner’s officer wife who was infected with HIV and had TB, and at that time I was not afraid but now with this MDR-TB I am very afraid and want to learn about it. I don’t have protective clothes and worrying about who is going to take care of me if I become sick with MDR TB?

I am not yet working with TB now, also because many people still hide their status, and nurses and VHWs do not collaborate in the prison. I would like to do the health education now on TB with the inmates (around 3000) as they are currently very much neglected. The information on TB for inmates would spread quickly to other prisons also. The inmates would love it! How to take care of themselves, helping others. They need empowerment and more knowledge.”