When rickshaw driver Vishram (40) selflessly went to help out with the 2015 floods in Chennai, India, he never expected to come to regret it. He worked in muddy water for over two weeks, providing food to victims. He reasoned it was because of the dirty water that he had picked up a nasty cough, but soon he started developing a persistent fever so he decided to pay his doctor a visit.

The doctor there sent him to another clinic, where he would be able to get tested for tuberculosis without incurring any costs. He received a voucher and got tested as soon as possible. He found out that this was a wise decision when the doctor called with the results. ‘Rif resistance had been detected’ he said, ‘you need to go to a hospital right away’.

Vishram was quickly admitted to a local hospital and received treatment until he was discharged to continue with the regimen at home. Months passed, when he received a phone call from the hospital, telling him that he had ‘MDR’. He was explained that this refers to Multi-drug-resistant tuberculosis, and that ‘traditional’ TB drugs would not be able to cure him.

It took a while for him to receive his full diagnosis, which meant that it took two whole months before he finally received the right treatment. Finally the new drugs were giving him some relief after months of taking ineffective medicine. His symptoms started to recede, yet twelve hours after taking his medicines the side-effects of the toxic drugs would cause him to feel very uncomfortable. “ No one should get this disease” he sighs, “when I was first diagnosed, none of my relatives showed up”. The only blessing was that his wife and two boys had not been infected and he made sure his children would sleep at their grandparents to be sure. Fearful of infecting his family, he would sleep elsewhere and would isolate himself. The disease and isolation were taking their toll, and he started becoming depressed, would not be able to sleep and started talking to himself. He even started to develop suicidal thoughts, but the support he received from a healthcare worker provided by the EQUIP program helped him to keep going. ”Life is there to be lived” she would tell him on her twice-monthly visits to give him food and support. 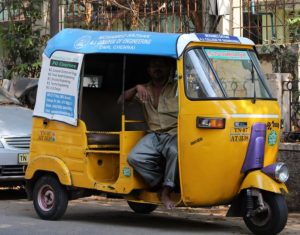 The doctor would encourage him and helped alleviate some of the side-effects. Slowly he would start to feel stronger, but kept from working out of fear of infecting people around him. As a rickshaw driver, the open sides of his vehicle would mean he had little protection from Chennai’s polluted air, which would irritate his lungs. Instead he chose to do odd jobs like housework to make a little money.

Halfway through his two-year regimen he was still unable to return to work. Using the kickstart on his rickshaw would result in blood filled coughing sprees and he was forced to sell some of his wife’s jewelry for the family to stay afloat financially. Luckily his wife chipped in, making roughly 150$ a month that helps with the basic costs of life.

He would like other MDR-TB patients to be better informed on potential side-effects of TB drugs so that they won’t take them by surprise as Vishram experienced. He would love to be able to talk about his experience with fellow MDR-TB patients, to exchange advice and share stories. Counseling and good information are key in his opinion, knowing what to expect can assist in dealing with the intense two year course. REACH, a local organization that executes the EQUIP project provides him with someone to ask questions to, someone who visits him at home and provides him with coupons for nutritious food that helps his recovery.

It was from a booklet given to him by  REACH worker Kalpana that he learned that he could not have contracted his disease from working in the dirty flood waters. He now knows that bacteria spread TB and that through cough hygiene he can minimize the risk of infecting others. Yet, he remains vigilant “Once my results are good, I will stop isolating myself’ but until then there is little for him to do but remain hopeful, take his medicine and above all have faith that his disease can and will be cured.