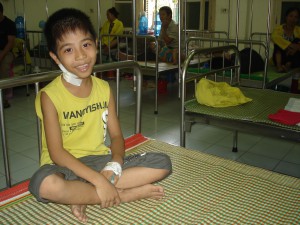 Children living in households with a person who has infectious tuberculosis (TB) are being successfully screened, registered and treated for latent TB. A new approach to prevent TB among children was tried out in four Vietnamese provinces where HIV prevalence – and the risk to children – is relatively high. The success of the pilot project led to its adoption by the national TB program as a model to be rolled out in 18 provinces by the end of 2015.

Globally, up to 80,000 children die of TB and over half a million are infected each year, according to World Health Organisation (WHO) estimates. The disease is difficult to diagnose in children; the actual incidence of TB among children is possibly higher.

In Vietnam nearly 100,000 people, among whom 1500 children are found and treated for TB every year. This represents significant underdiagnosis of children with TB.

It is important to diagnose and treat TB in children and give preventive treatment to children at risk. No generation should grow up with a latent TB “time bomb” that could later be transmitted to other generations.
– Agnes Gebhard, KNCV Tuberculosis Foundation (KNCV).

In 2008 KNCV contributed to the development of an international guideline on TB in children in high HIV-prevalent areas, by The International Union Against TB and Lung Disease (The Union). The guideline was launched in 2010, along with a Childhood TB Desk guide, published by WHO/The Union.

To promote the practical use of these guidelines and with close involvement of the National TB Program (NTP), KNCV took the lead in 2011 for a pilot project to address childhood TB in Vietnam according to the new WHO-endorsed strategy.

KNCV and Vietnam have a partnership of thirty years in TB control. Vietnam is a pioneering country in various ways. It is a country currently in transition, both economically and epidemiologically, and the TB epidemic is expected to be over its peak.

But now is not the time for complacency. We need to make more effort to ensure that everyone is diagnosed, and is diagnosed early on. Vietnam is the first high prevalence country that is considering contact screening and implementing preventive TB treatment on a mass scale.

We are not finding TB patients early enough. According to the latest studies and modeling, transmission of TB may be taking place much earlier: even before it is possible to diagnose TB.
– Agnes Gebhard

Vietnamese guideline on TB and HIV in children

To develop a short Vietnamese guideline on TB in children, both with and without HIV infection, meetings and training sessions were held to engage key stakeholders and create consensus on the new policies. A multi-sectoral writing committee was formed, which included TB specialists, an HIV specialist, a pediatrician, a radiologist, a laboratory specialist, and a nurse. The most important elements of the new national guideline on childhood TB are child contact tracing and treatment for latent TB infection, and a new method for diagnosis and involvement of pediatricians in the national TB program to report on children with TB.

The childhood TB guideline was successfully introduced in four provinces with a relatively high prevalence of HIV, covering a total of 38 districts and 704 communes. Training was given to 1,578 health care staff in the health system. Children who were identified as household contacts of sputum smear-positive TB patients were screened and registered and given isoniazid preventive treatment against latent TB.

The success of this new strategy has resulted in the approach becoming a model for the national TB program of Vietnam. The NTP took full ownership, and with domestic and Global Fund resources the strategy is currently being rolled out in 18 provinces (3 provinces in 2013; 3 provinces in 2014 and 12 provinces in 2015).

Under the Challenge TB project KNCV is providing technical assistance to the scale-up and evaluation of the childhood TB policies that were piloted under the TB CARE I project and rolled out with Global Fund resources and technical assistance from TB CARE I. The KCNV-led, USAID-funded Challenge TB project will also support the measurement of the effect of the new national childhood TB strategy on the case notification of childhood TB and treatment results in children.

Although the number of children with TB is not high, compared to the number of adults with TB, too many children with TB remain undiagnosed. It is important to diagnose them all and give preventive treatment to eligible children. We need to ensure that the generations that are now growing up are free from TB.
– Agnes Gebhard.

About TB control in Vietnam

In 2006-2007 the first national TB prevalence survey was held in Vietnam. It showed a higher than expected TB burden. In years that followed efforts were stepped up to increase detection of all tuberculosis. This includes active case-finding and treatment of childhood TB.

Vietnam has 63 provinces with provincial TB hospitals or TB units as part of the provincial preventive medicine department. There are 696 districts, each with a TB coordinator, a total of 975 microscopy points, 63 provincial laboratories and 2 (sub) national reference laboratories. The 11,000 communes have a commune health worker responsible for TB. Village health workers have a task in educating the community on TB, referral of people with symptoms and support to treatment. In addition there are three sub-national TB referral hospitals.

Vietnam aims to be one of the first Asian countries to go into the TB elimination phase. The country is embarking on an ambitious 15-year plan to reduce the epidemic to a prevalence level of 20/100,000 in 2030.