Tuberculosis is not always easy to diagnose in children. Keshia was lucky that her father recognized his daughter’s symptoms. 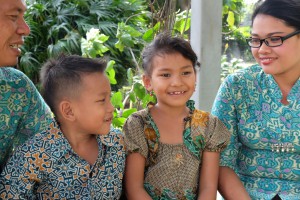 When Keshia was five years old, she was diagnosed with tuberculosis and had to undergo a year of treatment. Initially, in 2010, her father, Binsar Manik was diagnosed with multidrug-resistant tuberculosis (MDR-TB). He was not fully aware about TB symptoms until he received treatment at the hospital. There, Binsar not only received proper treatment but also gained more knowledge about TB, including the symptoms. As a result, he recognized that his daughter was experiencing the symptoms of TB. “When Keshia got sick, she had loss of appetite, and continuous cough¬ing” said Binsar. Although his daughter was infected, his wife and son were not infected. Both Keshia and her father have been successfully treated for TB. Keshia was cured in 2012 and her father was cured of MDR-TB in 2013. Today, both of Keshia’s parents are involved in peer education and giving information about TB in schools.

Read the full story of Keshia and her parents, Binsar Malik and Lestari Handayani in the Challenge TB newsletter.